During rehearsal last week we found a befuddled scientist wandering around backstage and demanded he explain himself.

Oi. Who are you and where have you come from?

Hi, I’m Tom the Scientist. No last name I’m afraid. I’m a pretty one dimensional character right now but I really feel like I’ve got a lot of potential.

As far as I can tell, I was grown in a big fish tank by Rising Ape Labs. I emerged last year, fully formed and ready for science and have been sciencing away in their Publish or Perish show ever since.

You seem a bit unsure of yourself. Why is that?

The problem is that my history, character and actual behaviour are all decided for me each night by this weird group of people called an ‘audience’ so it’s hard to know anything for certain in my life.

Well can you at least tell us why the show is called Publish or Perish?

As you probably know, publishing research papers is a really big deal and I’ve got a big deadline for a very important paper coming up. I should make it as long as I’m not distracted by any bizzare characters or side quests.

The ‘perish’ part is quite worrying, personally. There are rumours around the uni that a shadowy yet powerful cabal exact painful punishments on those who fail their departments. But as long as the audience make the right choices for me, I’m sure I’ll be fine. I hope so anyway.

How does it feel to have your destiny completely out of your hands each night?

It’s actually pretty exciting. Last week I had to go to the Moon to research the best way to put tiny hats on spiders. I guess it must have made sense at the time.

Wild stuff. Any advice for audience members aspiring to be a researcher?

The best way to put a tiny hat on a spider is to open a tiny hat shop. They just come in and try them on themselves!

Thanks, Tom. We can’t wait to decide your fate!

Rising Ape Collective perform Publish or Perish on Saturday 22 February at The Room Above, Bristol, as part of a comedy double bill with improvisers The Free Radicals.  Book your tickets now

3 comments on “Double Bill: Publish or Perish & Schrödinger’s Hat @The Room Above, 22 Feb”

This February, Rising Ape Collective presents a double bill with a difference – a night of science comedy and interactive theatre, the likes of which Bristol’s never seen…

Get your tickets now

The return of the choose-your-own-comedy-adventure from Rising Ape, where the whole audience gets to play together.

You and your friends take control of a helpless young scientist. Your task? Make it through the strangest day of their life in the weird world of Academia, guided by the all-knowing game masters.

Mashing up live action role play, daft songs, a fieldtrip-full of improvisers and an unhealthy dose of audience suggestions, surviving the sci-fantasy world of Publish or Perish ultimately depends on you – choose wisely!

“I loved being able to vote on the outcomes and the actors’ amazing ability to make things up on the spot.”

“I’ve never laughed so much, for so long”

“It brought an audience of strangers together in a way that I didn’t think was possible!”

We’re excited to be hosting the Bristol premiere of comedy science showcase – Schrödinger’s Hat, the show from the amazing Free Radicals of Reading that fuses together real science and improvised comedy theatre

At the heart of the performance is an engaging and informative talk from a mystery local researcher.

The Free Radicals players won’t have heard the talk before and, without rehearsal or script, they take its themes to produce a truly astonishing comedic journey of the imagination.

Get your tickets now

Huge thanks to everyone who came along to the Island gallery and became Time Saviours over the last two weeks. We tasked you with designing and building prototype inventions so good we could send them back in time to help out/sell to our ancestors. We were not disappointed…

Yes, Rising Apecorp, and unexpected guest Napoleon Bonuspoints, were blown away by your ridiculous creations, such as:

Well done to the two winning teams, who, in particular, brought extraordinary creativity to their solutions for the challenges of the past- or at least worked out how to suspend mannequin legs from the gallery ceiling. Commiserations to the teams coming last, we hope the Peter Kay Live DVD and George’s favourite glove make up for your efforts.

Above all, thanks so much to Creative Reactions Bristol for having us as fairly chaotic part of their programme for this year, and for the team’s support on the nights.

Enjoy the pics below to get a sense of how it all went. If you missed out, keep your browsers peeled for details of future events, we hope you can join us soon.

Join Rising Ape and Creative Reactions Bristol for an artistic evening out with a difference over two nights this May.

Ever thought a pub quiz needed less questions and more masking tape? What if Dragon’s Den had a love child with Scrapheap Challenge which went along on Bill and Ted’s Excellent Adventure? Then Time Saviours needs you!

The year is 2026. Time travel is an everyday reality. Apecorp have invited the finest creative minds in Bristol to their imagi-lution suite for one purpose: changing history for the better whilst making money off this extremely dangerous technology.

You and your colleagues will cut, tape and glue. You will laugh, cheer and argue. But will your team come out on top of the pitch deck?

Bring your pals, grab a drink and get stuck in as we challenge you to solve the problems of the past with your fantastic inventions, and most of all, enjoy yourselves!

Get your free tickets now for the shows on Thursday 23rd May or Thursday 30th May.

This event is a part of the SciArt exhibition curated by Creative Reactions – Bristol, taking place at The Island Gallery Space and North Art Gallery throughout May.

How do you save the world from the debris of satellites made of dogs? Or help children hooked on baby-steroids? Or come to terms with the Earth becoming flat? These lot had the answers.

More than 70 people crowded into the Rising Ape Corp Imagination Solution Nexus (the top of Hamilton House) to first create the pressing problems and then solve them (or at least make money off them) out of bits of scrap.

Pitches were pitched, bonus points handed out and, after a parade through the building, the winners announced in the Creative Reactions Gallery itself.

The enthusiasm and creativity shown by the teams made this one of our favourite events so far.  Enjoy the gallery below to get a sense of the chaos, we can’t wait to Invent the Future with you all again soon.

Thanks to Matt Lee of Creative Reactions Bristol for the photos. 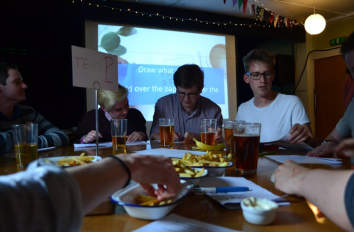 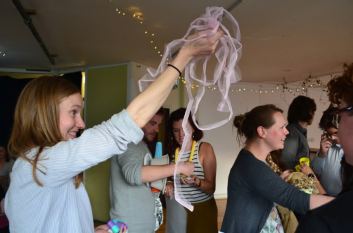 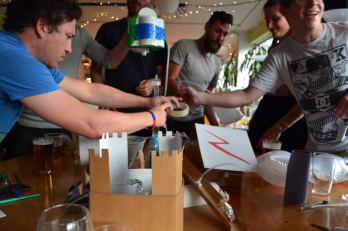 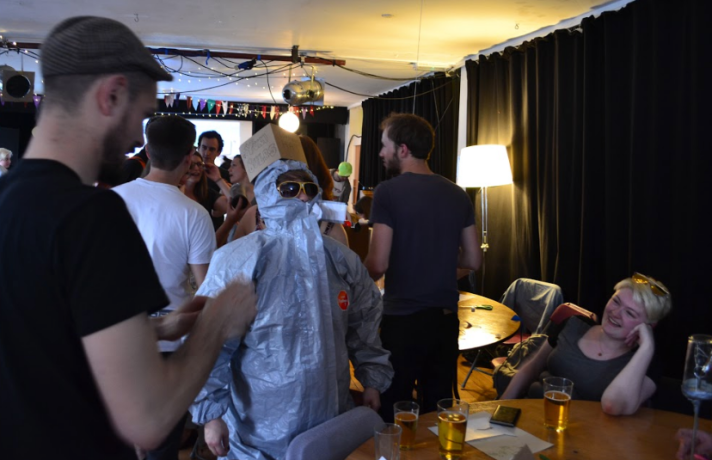 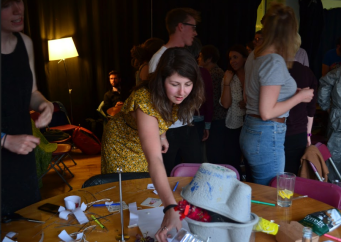 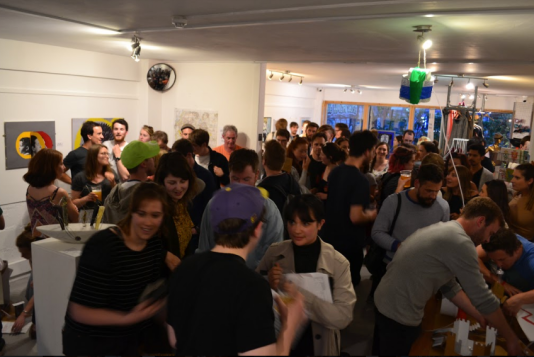 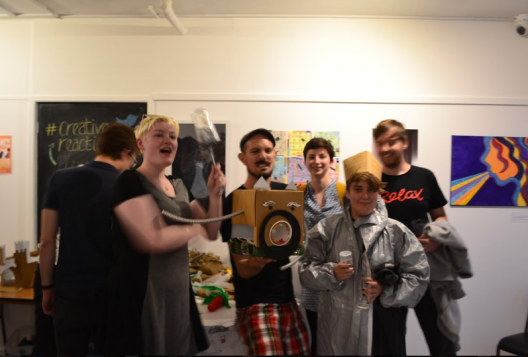 Join Rising Ape and Creative Reactions for an evening out with a difference at Hamilton House, Thursday 17th May.

Ever thought that a pub quiz needed less questions and more masking tape? What if Dragon’s Den had a love child with Scrapheap Challenge?

The year is 2025. Apecorp have invited the finest creative minds in Bristol to their new imagination solution suite for one purpose: competition.

Your team will cut, tape and glue. You will laugh, cheer and argue. But will your team come out on top?

Bring your pals, grab a drink and get stuck in as we challenge you to solve the problems of the future with your fantastic inventions, and most of all, enjoy yourselves!

Get your FREE tickets (limited) now →

0 comments on “Want to adopt a bat with Avon Bat Group?”

A BIG thank you to Kiri and Stuart from the Avon Bat Group for coming to Enter the Bat Cave and showing off the beautiful little animals they have in their care. Everyone really enjoyed getting up close and personal with an animal that is so rarely seen by the general public.

If you are interested in supporting Avon Bat Group, adopting a bat, or just want to know more about your new favourite mammal; you can find more information on their website at www.avonbatgroup.org.uk, or like their facebook page for regular updates. We hope that after all you learnt during the evening, you can really appreciate how important their work is.

Thank you to everyone who came last night, we hope you had a great evening! Keep an eye on the website for more information about our next event and for another of Antony’s excellent infographics about Enter the Bat Cave.