During rehearsal last week we found a befuddled scientist wandering around backstage and demanded he explain himself.

Oi. Who are you and where have you come from?

Hi, I’m Tom the Scientist. No last name I’m afraid. I’m a pretty one dimensional character right now but I really feel like I’ve got a lot of potential.

As far as I can tell, I was grown in a big fish tank by Rising Ape Labs. I emerged last year, fully formed and ready for science and have been sciencing away in their Publish or Perish show ever since.

You seem a bit unsure of yourself. Why is that?

The problem is that my history, character and actual behaviour are all decided for me each night by this weird group of people called an ‘audience’ so it’s hard to know anything for certain in my life.

Well can you at least tell us why the show is called Publish or Perish?

As you probably know, publishing research papers is a really big deal and I’ve got a big deadline for a very important paper coming up. I should make it as long as I’m not distracted by any bizzare characters or side quests.

The ‘perish’ part is quite worrying, personally. There are rumours around the uni that a shadowy yet powerful cabal exact painful punishments on those who fail their departments. But as long as the audience make the right choices for me, I’m sure I’ll be fine. I hope so anyway.

How does it feel to have your destiny completely out of your hands each night?

It’s actually pretty exciting. Last week I had to go to the Moon to research the best way to put tiny hats on spiders. I guess it must have made sense at the time.

Wild stuff. Any advice for audience members aspiring to be a researcher?

The best way to put a tiny hat on a spider is to open a tiny hat shop. They just come in and try them on themselves!

Thanks, Tom. We can’t wait to decide your fate!

Rising Ape Collective perform Publish or Perish on Saturday 22 February at The Room Above, Bristol, as part of a comedy double bill with improvisers The Free Radicals.  Book your tickets now

‘Is Taylor Swift really swift?’ With this crowd-sourced question pulled from a top hat, the audience of Play This Show! loaded up Publish or Perish and took control of luckless PhD student, Tom, to start their journey into the world of fantasy academia.

As ever, the course of good research never did run smooth. Together, the audience faced down nagging undergraduates, impossible deadlines, shadowy senior management figures, office equipment come to life, and overcame them all. They drank coffee, they let down their friends, they gained and (mainly) lost health, they even became a fantastic machine for measuring cow manure. They survived. Just.

I loved being able to vote on the outcomes and the actors’ amazing ability to make things up on the spot. Also I’ve never laughed so much for so long… (the show) really brought an audience of strangers together in a way that I didn’t think was possible!

Thanks to everyone for coming and being such willing participants of this weird, hard-to-describe show. Putting you in control of the action can feel terrifying so we were genuinely blown away by the generous response and the imagination you demonstrated throughout. Huge thanks also to Alistair Aitcheson and his Incredible Playable Show in the second half- Who knew we’d all enjoy becoming supermarket managers so much?

Enjoy the pictures of the nonsense below (thanks to James Pepper for the photography) and look out for the next chance to ‘Play This Show’! 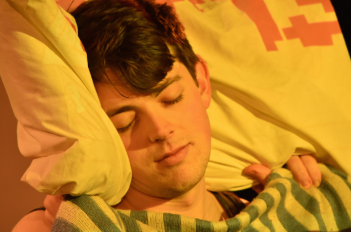 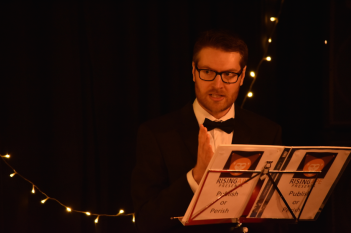 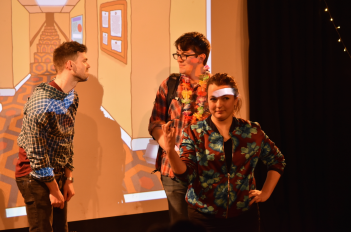 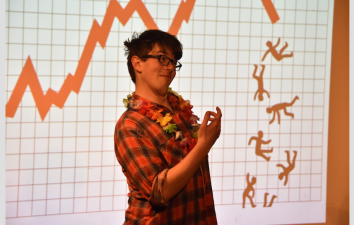 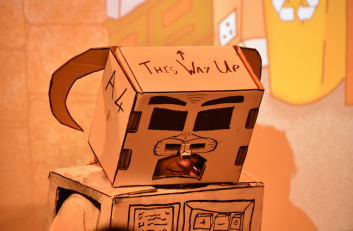 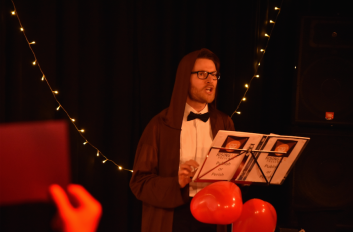 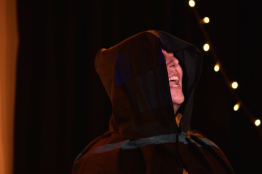 Grab your tickets now from the Bristol Improv Theatre website 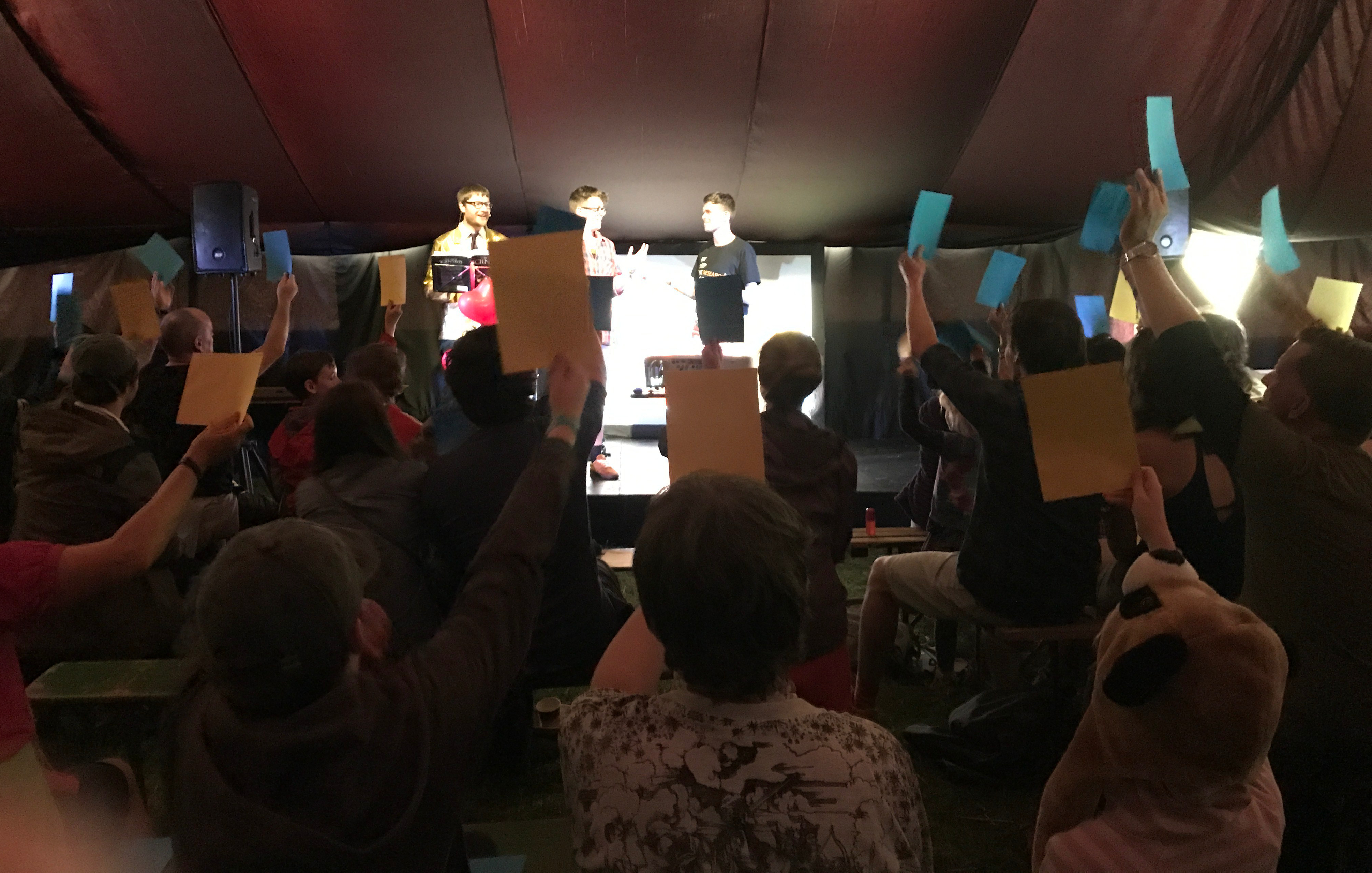 Publish or Perish is the choose-your-own-adventure show where the whole audience gets to play together.

Alongside your friends, you’ll take control of a young scientist trying to make it through the strangest day of their life, guided by the all-knowing game master.

Mashing up daft songs, live action role play, deadly punning photocopiers, a lab full of improvisers and an unhealthy dose of audience suggestions, surviving the sci-fantasy world of Publish or Perish ultimately depends on your choices – democracy taken to the next level!

After a fantastic couple of shows at Green Man Festival 2017, we’re really excited to be bringing this show to a hometown audience at the brilliant Bristol Improv Theatre. And if you caught it last year, there’ll be new cast members, new games and even more pop culture surprises to challenge your spur of the moment decision making skills.

Created by game developer Alistair Aitcheson, The Incredible Playable Show is an interactive video game comedy show where you, the audience, take to the stage!

Become human buttons, take on the Power Rangers, zap each other with barcode scanners, and play Pac-Man using inflatable toys. Or sit back, and watch your friends literally become cogs in a hilarious machine!

0 comments on “N is for Naming”

By Jonathan Farrow of the Thoughtful Pharaoh

Next time you happen to be walking though the Chamela-Cuixmala nature reserve on the West Coast of Mexico, keep your eyes out for this parasitoid wasp:

Its scientific name is Heerz lukenatcha.  There is also a related wasp named Heerz tooya.  Who comes up with these things!?

Biologists, it turns out.

The current official naming system for animals is run by the International Commission on Zoological Nomenclature (ICZN).  This multi-national commission, based at the Natural History Museum in London, keeps track of all the rules as well as the accepted names.

Generally, the first person to find an organism, make sure it hasn’t been named yet, and submit a scientific paper naming it, will get to choose a name.  While there is quite a bit of freedom, the ICZN does provide the following guidance: “Authors should exercise reasonable care and consideration in forming new names to ensure that they are chosen with their subsequent users in mind and that, as far as possible, they are appropriate, compact, euphonious, memorable, and do not cause offence.”

That guidance does get stretched sometimes…

During a 1980 entomological expedition to the Andes, one member of the team kept shouting “sh*t man, f*ck!” every time something went wrong.  I guess a lot of things went wrong, because before long the whole team started calling the expedition the SMF Expedition.  When a new genus of beetle was discovered, they named it Esemephe (pronounced SMF).  They justified it to the ICZN by saying that it was a melding of the greek words essymenos (hurrying) and ephestris (mantle), but everyone else knew it was really a reference to SMF.

Not so compact, euphonious, or memorable

The longest accepted scientific name is Parastratiosphecomyia stratiosphecomyioides, a species of fly.  At 42 characters, its only three short of pneumonoultramicroscopicsilicovolcanoconiosis, the longest word in the English dictionary.

Some names were actually designed to be offensive.  Two paleontologists, Cope and Marsh, basically had a naming war at the end of the 19th century. Marsh seemingly struck the first blow, submitting Mosasaurus copeanus (-anus is a greek suffix meaning ringed).  Later, Cope named an extinct mammal Anisonchus cophater for all of his haters.  I guess he just wanted to shake it off.

This trend was repeated in the 20’s with swedes Elsa Warburg and Orvar Isberg. In 1925, Warburg named a trilobite Isbergia planifrons, after Isberg’s apparently flat forehead (an insult in Scandanavia).  In 1934, Isberg retaliated with a mussel he named Warburgia crassa, after Warburg’s girth (crassa=fat).

Sometimes, biologists just feel silly.  Here are a few of my favourite scientific names, as a reminder that scientists can be funny.

There is a genus of fungus beetles called Gelae.  The species names are baen, belae, donut, fish, and rol.  Put those together and you get a whole bunch of tasty treats!  There is another genus of beetle called Agra, and one biologist in particular, Terry Erwin, has had a lot of fun over the years with some punny species names like cadabra, memnon, and vation.

Sometimes biologists go for the celebrity names, like a beetle named Scaptia beyonceae for the yellow fur on its behind or a fossil fly named Carmenelectra shechisme (pronounced Carmen Electra, She Kiss Me).  In 2013, Carmenelectra shehuggme was also added.

Other times, taxonomists like to make you read it a few times, like a moth named Eubetia bigaulae or a scarab in a large family named Cyclocephala nodanotherwon.

1 comment on “Evolutionary Plasticity and the Rise of Bipedal Mice”

In this episode of Rising Ape Speaks we discuss how draining almost all the water out of fish’s pool has illustrated that evolution is by no means a closed book.

This leads on to James confessing his childhood spent dreaming up unethical experiments, and how the possible explanation for Antony‘s gymless body may lie with his cheese-eating father. Later on, creationists get it in the ear. Yes, evolution may be nature’s way, but Rising Ape Speaks will always stick to its timeless winning formula!